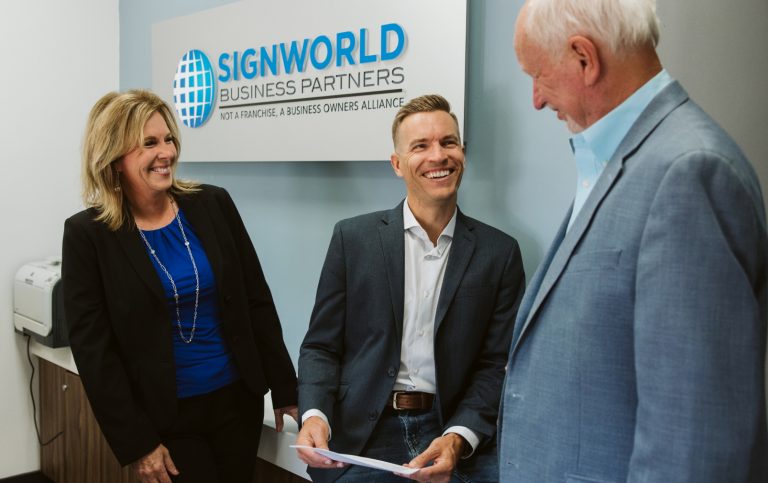 Honolulu, HI – August 15, 2011 – Ken Kindt of Signworld today congratulated Larry Foster of Signs & More for their achievements on the eve of their 10th anniversary.

Speaking on the occasion, Ken Kindt said, “I would like to congratulate Larry and his team for their exemplary work throughout these years. Signs & More is celebrating its 10th anniversary sign manufacturing business. Larry has been a role model for Signworld owners and new entrants can learn a lot from him.”

Larry Foster, is the Owner of Signs & More in Troy and this is his 10th year in the sign manufacturing business as a Signworld Owner . Larry has previously worked for K-Mart in a variety of management positions before striking out on his own.

Appreciating Larry’s progress as a Signworld owner, Ken Kindt said, “Today, Larry owns his own 8000 square foot building and supervises a staff of six professionals.  Some of their top customers include Pick and Pull Franchise with 52 locations.  They buy over $100,000 each year of disposable indoor and outdoor signs.  Larry and his team also work with Flagstar Bank HQ and their 175 branches.”

Recently, Larry acquired Kerby’s Coney Island Franchise with 28 locations and worth about $50,000 per year of indoor throw away signage. Larry does over $75,000 a year of indoor ”short term use” posters for the bank.

And, for years Larry and his team have manufactured signs for several Chili’s Restaurants regions to include over 300 restaurants.  They buy roughly $60,000 per year of indoor posters.

Apart from Ken Kindt, the representatives from top management of Signworld also included Jack Warner, VP of Signworld. Applauding Larry’s achievements, Jack Werner said, “Larry’s personal salary has increased every year for the past 10 years, despite the terrible economic situation of the Detroit metropolitan area. He has done a tremendous job as a Signworld owner. Congratulations to Larry and his team for 10 great years of owning their own business”

Signworld is a national organization with more than 260 independently owned sign companies, which provide commercial custom signage and graphics. Jack Warner and Ken Kindt lead the Top management at Signworld. It is personable, creative, rewarding and ideal for people-oriented individuals who have the desire to learn how to manage a sales and production business. Signworld affiliates are a cut above traditional sign companies. Ongoing support and training is provided along with state-of-the-art equipment. Signworld business model runs on a no royalty concept.  You can learn more about Signworld at www.signworld.org